On 6th April 2021 at The Big Cat Sanctuary, resident jaguars Keira and Neron became parents to a female rare black jaguar cub. They were paired through the European Endangered Species Breeding Programme. After two years of being together and their relationship growing, the pair successfully had a female black jaguar cub. Breeding is one of the Sanctuary’s four pillars of ethos, along with Welfare, Education and Conservation.

We held a competition for supporters to vote to name their new arrival. They had three names for people to choose from. Inti, which means Sunshine in Quechuan, Killari which means Moonlight in Quechuan, or Inka, named after the ancient South American tribe and means Princess in Quechuan.   We are so proud to announce that INKA was the winner!

The competition has helped the charity to raise money to care for Inka and all the jaguars on site. It has also raised vital funds for Jaguar conservation, with £10,000, being donated to jaguar protection projects run by Namá Conservation in Costa Rica, who are continuing the work of Universidad de Costa Rica. 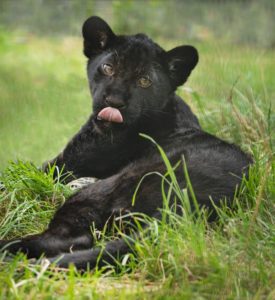 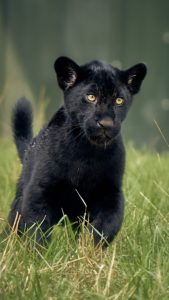 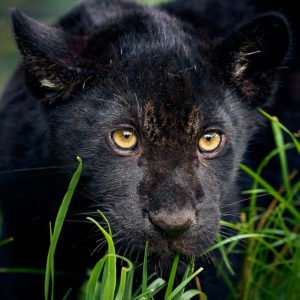 Now 4 months old, adorable little Inka received both of her vaccinations, which meant she was able to explore the outdoors for the first time! As the hatch opened, her inquisitive little head poked out from behind; curious to see what was there. Keira gave her an encouraging nudge to assure her everything was safe. There was a lot to take in, but mum was there by her side every step of the way.

Before we knew it, Inka began to explore her new home. She wandered around, smelling everything, and taking in her new surroundings. In no time at all, Keira and Inka began playing together, chasing each other around and jumping on one another. Inka even made her way onto the top of the tree platform all by herself!  Mum, Keira has been so patient whilst Inka has been growing and becoming feistier by the day. She has definitely won the ‘Mum of the Year’ award.

We are so excited to watch this little girl grow day by day and become part of the cat ambassadors. All our cats represent their wild counterparts and Inka will do an amazing job at representing the very best of the jaguar species.