The Big Cat Sanctuary is sad to announce that after a short illness, we had to make the heart wrenching decision to put our male White lion Ngozi to sleep.

Ngozi was born to Joy and Themba on 15th April 2013, right here at the Sanctuary along with his three sisters. As adorable cubs they kept everyone entertained with their antics which mostly involved running rings around the adults of the pride. Trouble was on the agenda all day every day around these mischievous youngsters, and it was an absolute marvel to see, observing the litter develop and change, almost daily. As Ngozi grew older, as anticipated, he would not be welcome to share his father’s pride for ever. We watched the family dynamics carefully to ensure Ngozi’s time to leave the pride was timed just right for everyone. On the day he left he was separated along with his favourite sibling, Imara, the calmest and gentlest of the girls and the perfect company for our Ngozi. 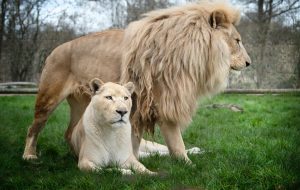 This boy grew and grew until we almost didn’t think he would stop. An absolutely striking lion, very tall and leggy with a huge deep chest and impressive mane running thick, not only across his neck and shoulders but also down along his belly. Such an impressive boy! He was lighter in weight than other male lions we have ever had, this is likely due to him being so tall and slim, but he was certainly the tallest lion the Sanctuary has seen. He was a total fan favourite with guests. Who wouldn’t be impressed by his size, the incredible quiff in his mane which made him look like he belonged in a Disney movie and his unbelievably deep growl, almost always emitted while he waited impatiently to be handfed. Again, most likely the most impressive growl of any resident lion the Sanctuary has ever seen. 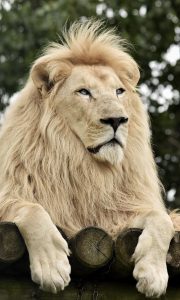 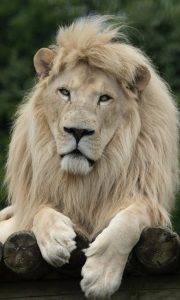 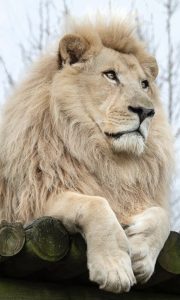 Keepers loved to watch the relationship between Ngozi and Imara as it developed. Once upon a time when handfeeds were offered, there was no doubting who was going to receive the treat. Ngozi was the king of his pride and as a result he claimed the majority of the feeds. In more recent years, he mellowed and became more willing to share with his sister. While being called over for handfeeds, the pair developed a habit of what appeared to be deciding amongst themselves who would take the feed. If Ngozi didn’t immediately get up, we would see Imara approach him for a head rub, as if checking with him that it was ok. Having gained permission from her big brother, she would mooch across to greet the guests and gratefully take her feeds. 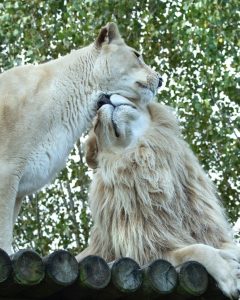 The cat team noticed Ngozi did not appear to be his normal self for a little while, he certainly seemed subdued. Careful monitoring in the days that followed and attempting treatments did not seem to improve Ngozi’s condition and so our vet, Nic Masters, visited to take some blood and hopefully find out a cause for his decline. Sadly, the results showed that Ngozi’s kidneys had failed, and it would not have been ethical to wake him up from his anaesthetic.

Although it is never possible to know what is round the corner when taking care of these incredible animals, this has taken everyone a bit by surprise. Ngozi was always such an impressive and indescribably beautiful cat, and a formidable presence here and he will be sorely missed.

The keepers will of course now be keeping very close eyes on Ngozi’s sister, Imara. It is important we do what we can to monitor her during this transitional period and her welfare is foremost in our considerations right now.

Briony and the Keeping Team