We are sorry to say that The Big Cat Sanctuary has some sad news.  On Wednesday afternoon Nuwara, the rusty-spotted cat was put to sleep.

For such a tiny cat, she as left a big hole in our hearts.  Nuwara was a huge favourite with not only the staff but the guests as well.  In fact, when researched, she was discovered to be the favourite of 60% of the guests to our lodges.  And why?……. well, what she lacked in size, she made up for in personality.  And what a personality.

Having arrived here in 2011 at 11 months old, this little lady with a big attitude immediately started capturing the hearts of everyone who caught sight of her.  Fast, fun, and feisty she would race around her enclosure whenever keepers brought food, keeping her distance, mostly, but never letting you take your attention off her.  The beautiful big eyes with her gorgeous terracotta coat often prompted comments about how she resembled Shrek’s Puss in Boots.  In personality too she resembled him very much, perfecting the innocent gaze, while also being a little hooligan when she wanted to be.  Thank goodness nobody gave her his sword!

Food was Nuwara’s favourite thing, she was never a particularly playful cat, but we were able to keep her stimulated using nutritional enrichment, we would have her solve puzzles or get a workout while obtaining her food.  No surprise that Nuwara would always throw herself into these challenges with gusto and a sharp intelligence that made her achieve her prize quickly and efficiently.  Nothing could keep her from her beloved food.

Another reason why Nuwara was such a charmer is perhaps because people had to work to see her.  Nocturnal in nature, she wouldn’t always be the easiest cat to spot, hiding in plain sight, she would often be missed by people not noticing her nestled in her outside nest box, she would blend in so well with the straw.  All this just meant that when she did make an appearance, she was extra special, and who could not fall in love with this zippy, zesty little madam.

In the last couple of years Nuwara had certainly slowed down and mellowed slightly. Still bright, sharp as a tack and bursting with personality but more relaxed and focussed.  For the last year she has formed a special partnership with our tallest member of the keeping team, Nathan, who has taken on the role of being her primary trainer, with great success.  This little and large pair did great work together getting Nuwara prepared for when she might need veterinary treatment, and eventually, when we were beginning to think she might keep going forever, she did need treatment.  At the end of July, we started to notice that Nuwara’s belly seemed a little swollen.  Gradually she became bigger, and investigations pointed towards issues with her heart.  Despite attempting various medications, we were unable to slow the fluid build up which had direct welfare impacts as Nuwara was becoming increasingly uncomfortable.  It was therefore decided, with the support of our incredible veterinary team, that we were no longer able to provide good welfare for our tiniest family member, and it was in her best interest to say goodbye.

Although this is a very difficult loss, we must be encouraged by the fact that Nuwara was 12 years old.  The maximum age for a rusty.  She had a fabulous life with us at the Sanctuary and she inspired so many guests to really take notice of how incredible small cats can be.  Guests often come for the big cats and leave having a new love for small cats and much of this is down to Nuwara.  Despite being the smallest cat on earth, she had an enormous impact and left an enormous impression.

This tiny Puss in Boots has left very large boots to fill. 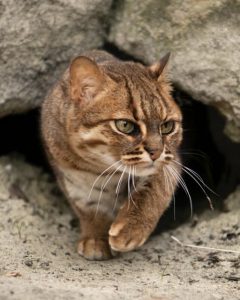 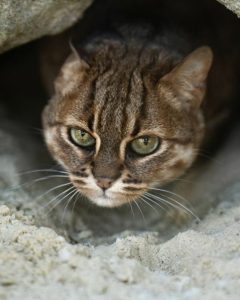 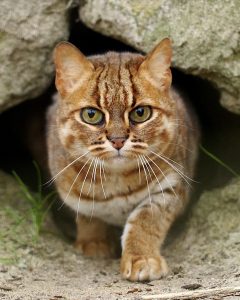 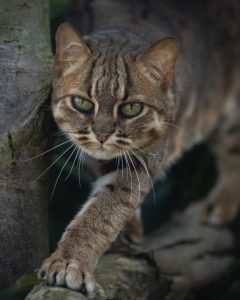 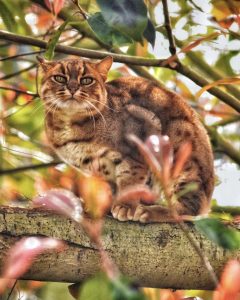 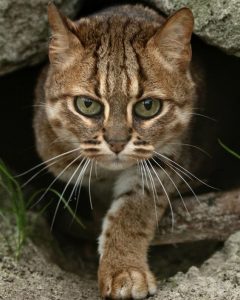